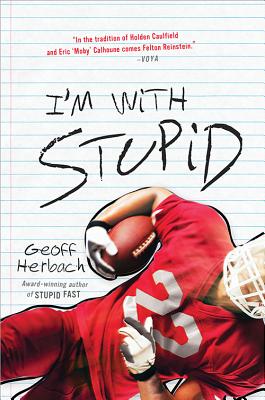 Felton Reinstein has never been good with stress. Which is why he's seriously freaking out. Revealing his college choice on national TV? It's a heart attack waiting to happen. Deciding on a major for the next four years of his life? Ridiculous. He barely even knows who he is outside of football. And so...he embarks on The Epic Quest to Be Meaningful.

"Herbach has created a modern-day Hamlet who searches for redemption and peace as he struggles with guilt, rage, and the mental and emotional breakdowns emanating from that long-ago suicide. In a surprisingly hilarious first-person narrative, Felton provides an original voice as he approaches manhood—a selection that boys will relish." — VOYA

"Felton Reinstein is one of my absolute favorite characters. If you're a reader, you really need to meet Felton." — YA Love

"Identifying with Shakespeare's Hamlet, Felton struggles with his own royal role as sports hero and his father's legacy as angry suicide . . .Herbach's character will continue to resonate with readers. The scenes of college coaches wooing Felton are spectacularly drawn, and his ultimate decisions about his "mortal coil" are anything but facile. Will Herbach follow his hero to Stanford? We can hope." — Booklist

"As in Sherman Alexie's The Absolutely True Story of a Part-Time Indian, Felton's family problems and personal anxieties are deeply felt but leavened considerably by his wry, self-deprecating narration." — School Library Journal

"A memorable character from an author worth watching." — Kirkus Reviews

Wee Wisconsin boy, Geoff Herbach wanted to play for the Green Bay Packers or join The Three Stooges. His tight hamstrings left him only writing. Now he writes YA novels, including the award-winning Stupid Fast series, and teaches at Minnesota State, Mankato where he blows his students' minds with tales of football and comedy glory, none of which are true. Visit www.geoffherbach.com for more information about the author, his books, and much more.