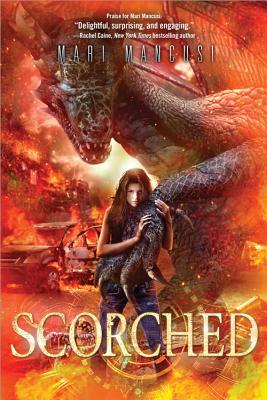 Saving the dragons could save the world...or start the apocalypse

Trinity Foxx is used to her grandfather's crazy stories, so she doesn't believe the latest treasure he brought home to their failing West Texas museum is a real dragon's egg. Not until Connor Jacks, a dragon hunter from the future, tells Trinity that the world is about to be wiped out by a fiery dragon war--unless they find a way to stop it.

But Connor's not the only one after the egg. His twin brother Caleb believes dragons have the power to save mankind and must be protected. Caleb has seen too many dragons destroyed in the war-scorched future--he'll do whatever it takes to save this one.

With a host of enemies hot on her heels, Trinity must decide who to believe. Connor the brave solider? Caleb the cocky rebel? Or the baby dragon that's starting to whisper to her...saying they are destined? The fate of the world may depend on her choice.

Praise for Scorched:
"Tense and action-packed. It's a brave new world, and I reveled in every page."--Sophie Jordan, New York Times bestselling author of Firelight

"A smoking triptych of time traveling, dubious double-crossing and enough dragons to sate the hungriest of gamers and fantasy fiends."--Kirkus