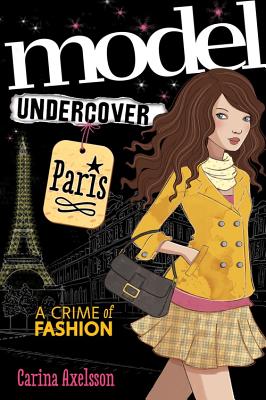 Nancy Drew meets The Devil Wears Prada in the first title of a new mystery series for girls.

MODEL UNDERCOVER introduces teen-sleuth Axelle Anderson, who seizes the opportunity to go undercover as a model during Paris Fashion week to uncover the truth about a top designer's disappearance—and clear her uber-fashionista Aunt's name.

Axelle Anderson doesn't care about fashion, in spite of her pushy fashionista aunt, Venetia. All Axelle wants to do in life is solve mysteries. But when top fashion designer Belle La Lune goes missing and Aunt Venetia becomes a prime suspect, Axelle must go undercover as a model to bring the truth into the spotlight.

Who knew modeling could be such a dangerous game?

"Well written and engaging, Model Undercover: Paris...takes us into the world of fashion and modeling... A light-hearted, fast paced, and clean page-turner, it would make a great summer read...If the author keeps developing Axelle’s many complexities, she could become quite a healthy role model." — Sahar’s Reviews

"Carina Axelsson kept me on my toes and had me guessing about the culprit until the very end. I really enjoyed the friendship between Axelle and Ellie, who showed that models are more than just pretty faces...I would recommend Model Undercover: Paris for those who enjoy mysteries as a fun read, especially for summer." — The Young Folks

"An entertaining, solid mystery with a resolution that will please most detective fans...not only is Axelle evolving into a deeper personality by the end of this book, but the cast of supporting characters—from the police chief’s son, Sebastian, to Hervé, the model booking agent—are fun to spend time with and well drawn." — VOYA Magazine

Carina Axelsson is a writer, illustrator, and former model. She grew up in California with her Swedish father and Mexican mother. After high school, Carina moved to New York City to model, then on to Paris where she published her first book. She currently lives in in the forests of Germany with four dogs and a very large aquarium full of fish.