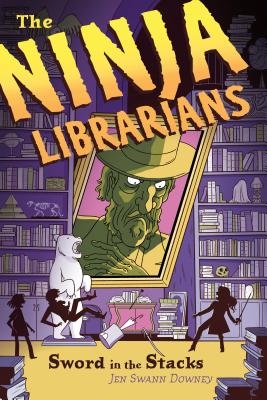 Sword in the Stacks

Second in this swashbuckling middle grade series following 12-year-old Dorrie Barnes' adventures as a sword-wielding ninja librarian (apprentice). Dorrie and her brother have joined the Lybrariad, a secret society of heroic librarians--their mission: save people whose words get them into trouble. But now the Lybrariad itself is in danger from an ancient evil called the Stronghold.

After stumbling upon the secret society of time-traveling ninja librarians, Dorrie has finally joined Petrarch's Library as an apprentice One day, she'll actually go on missions to rescue people whose words have gotten them into trouble. For now she's taking some interesting classes:

First and Last Aid: When Nobody Else is ComingSpears, Axes, and Cats: Throwing Objects with Precision and FlairCodes, Invisible Inks, and Smoke Signals: Keeping Secrets 101

But on a training mission to 1912 England, Dorrie finds herself dangerously close to a member of the Stronghold--the Library's biggest enemy. This is her opportunity Dorrie can spy on the enemy, find the missing key...and become a real Lybrarian

But if she makes a mistake, Dorrie could lead their enemy right to the very place she's trying to save...and everyone she cares about.

Praise for The Ninja Librarians: The Accidental Keyhand:
"Scrambles so madcap that it's hard to turn the pages fast enough to keep up."--Kirkus STARRED Review
" A] melding of fantasy, adventure, and history...Readers who miss the collegial, magical setting of Hogwarts will enjoy exploring Petrarch's Library."--School Library Journal
"Delightfully funny from the first page."--Booklist
"A rollicking adventure with a smart heroine, heaps of mystery and the whole of history to explore. It's like finding Lara Croft running your local library "--Lissa Evans, author of Horten's Miraculous Mechanisms