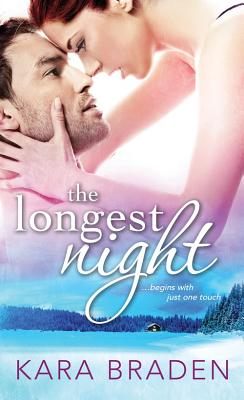 Ian Sherwood may be gorgeous and a genius, but people skills aren't really his forte. Which is going to make for long nights indeed when he's sent to convalesce in a remote Canadian cabin with former medic Cecily Watts.

Years ago, former Marine Captain Cecily Knight fled her dark past and the nightmares forever haunting her nights. Alone in the remote Canadian wilderness, she survives day to day...until Ian Fairchild comes storming into her life and shatters her protective seclusion.

Aloof but intriguing, defensive but undeniable, Ian is everything Cecily shouldn't want but can't ignore. He watches her with shrewd blue eyes, as if determined to decipher her secrets...and for the first time in years, she finds herself coming alive beneath the hands of a man with too many scars to count.

As the hushed and harsh winter closes in around them, two lost souls find themselves on the precipice of a love that could save their lives...or destroy them forever.

Praise for The Longest Night:
"One of the best debuting romance writers in memory..."--Booklist, STARRED Review
"Refreshing and insightful... Braden will soon amass a strong readership."--Library Journal, STARRED Review