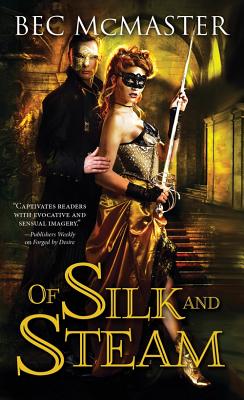 In the mist-shrouded streets of London, revolution is on the rise, vampires with ice-cold blood in their veins rule the streets, and war is brewing...

When her beloved father was assassinated, Lady Aramina swore revenge. The man responsible is well beyond her grasp, but his dangerously seductive heir, Leo Barrons, is fair game. When a bit of political intrigue gives Mina the evidence she needs to prove Leo is illegitimate, she has the means to destroy both the killer and his son--a man who troubles her heart and tempts her body.

A woman of mystery, Mina's long driven Leo crazy with glimpses of a fiery passion that lurks beneath her icy veneer. He knows she's hiding something, and he's determined to unravel her layer by silken layer. He just doesn't expect the beautiful liar to be the key to overthrowing the corrupt prince consort...or to saving his own carefully walled-off heart.

The stakes have never been higher: Mina has sworn revenge for her father's death, but the man she plans to destroy could be her own undoing...or the salvation of all London.