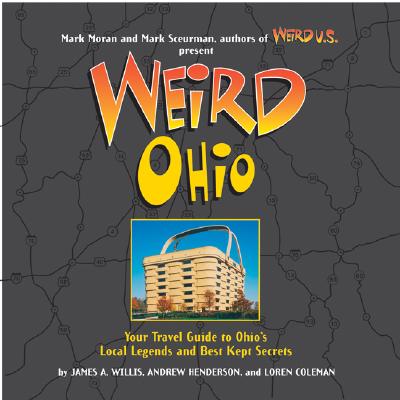 Ah, Ohio, so nice and normal. We have apple pie heroes like Hopalong Cassidy, Neil Armstrong, Thomas Edison, and Doris Day. Our state bird is the jaunty and ever popular cardinal, and our state flower is the carnation, found in the buttonholes of politicians and bridegrooms everywhere. We started America rolling by opening the country's first gas station, and we have a museum dedicated to America's music, rock and roll. Why, we're just so all-American normal, it can bring a tear to the eye. But there's something else we have a whole lot of, and that's...weirdness. Yes, the Buckeye State has lots and lots of strange people and unusual sites, and they burst forth from every page of this, the biggest, most bizarre collection of Ohio stories ever assembled: Weird Ohio.

James A. Willis was born and raised in Upstate New York. In 1999, he moved to Ohio and founded the Ghosts of Ohio (www.ghostsofohio.org), a nationally recognized paranormal research organization. James has been featured in numerous publications, television and radio programs, and live webcasts. He has given presentations throughout the state on how one may hope to find evidence of the existence of ghosts. James currently resides in Columbus with his Queen-loving parrot and the world's whiniest cat. When he's not seeking out all things weird and wonderful, James often stays awake nights wondering if he will ever lose the moniker of the Man Who Debunked Hell Town.Andrew Henderson is a writer and researcher who has been exploring Ohio's abandoned buildings, old cemeteries, ghost towns, ghost stories, and weird history for years. Since 1999, he has run the popular Web site Forgotten Ohio, and his first book, Forgotten Columbus, was published in 2002. His work has been featured both locally and nationally--most notably in the Washington Post. An alumnus of Ohio State University, Andrew lives in Columbus.Loren Coleman has been investigating cryptozoology and unexplained phenomena since 1960. He is the author of more than two dozen books, including The Copycat Effect; Bigfoot! The True Story of Apes in America; The Field Guide to Lake Monsters, Sea Serpents, and Other Mystery Denizens of the Deep; Tom Slick, Mothman and Other Curious Encounters; Mysterious America: The Revised Edition; The Field Guide to Bigfoot, Yeti, and Other Mystery Primates Worldwide; and Cryptozoology A to Z. Having grown up in Illinois before moving to New England, Coleman often traveled to Ohio to investigate breaking cases and has continued to visit the state frequently for fieldwork and conferences.
Loading...
or support indie stores by buying on
(This book is on backorder)