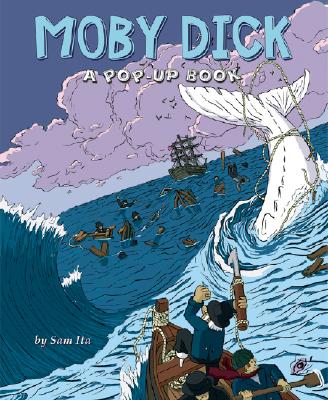 "Call me Ishmael." Three of the most famous words in all literature, they begin Herman Melville's masterpiece, "Moby-Dick." Now, the epic saga of Captain Ahab's obsessive quest for the white whale comes vividly to life in this three-dimensional graphic novel, the first of its kind. This phenomenal work is the creation of multi-talented artist Sam Ita, apprentice to Robert Sabuda--one of the world's master paper engineers. Every amazing element is awe-inspiring: there's not just one pop-up per spread, but several, surrounded by colorful comic book-style panels that convey the story's drama.
Some of the pops-ups are huge and incredibly detailed, like the Pequod itself, which rises gloriously from the page, complete with rigging. Others, smaller but no less wonderful, hide beneath flaps and folds. In one instance, readers actually get to look through a 3-D periscope and see Ishmael through the "lens," drifting in the ocean.
The quality of Ita's paper engineering is nothing short of breathtaking and will carry you off on an unforgettable adventure.