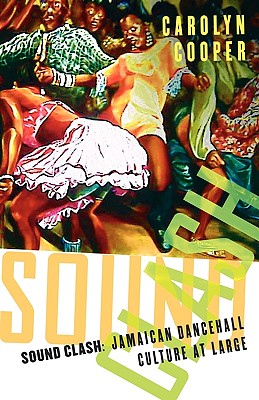 Megawattage sound systems have blasted the electronically enhanced riddims and tongue-twisting lyrics of Jamaica's dancehall DJs across the globe. This high-energy raggamuffin music is often dissed by old-school roots reggae fans as a raucous degeneration of classic Jamaican popular music. In this provocative study of dancehall culture Carolyn Cooper, Professor of Literary and Cultural Studies at the University of the West Indies, Mona, Jamaica, offers a sympathetic account of the philosophy of a wide range of dancehall DJs: Shabba Ranks, Lady Saw, Ninjaman, Capleton, Buju Banton, Anthony B, Apache Indian. She demonstrates the ways in which the language of dancehall culture, often devalued as mere 'noise,' articulates a complex understanding of the border clashes that characterise Jamaican society. Cooper also analyses the sound clashes that erupt in the movement of Jamaican dancehall culture across national borders.

"'Chatty chatty mout' you better shut up. With Sound Clash, Carolyn Cooper has rescued the debate about the importance of dancehall music from know-it-alls and know-nothings. With insight, humor, and an elastic intelligence that ranges with assurance over what has become the tricky terrain of contemporary literary theory, Cooper makes compelling--and as usual--controversial arguments about the fundamental relevance of dancehall music to the critical understanding of Jamaican culture to claat."--Colin Channer, author of Satisfy My Soul and Waiting In Vain

"At last, a book by a Jamaican that finally announces the powerful artistry and political force of artists like Shabba Ranks, Bounty Killer, Sizzla, Lady Saw, Capleton, and many of the dance-hall poets whose work has dominated the sound systems in Jamaica, the Caribbean and around the world."--Kwame Dawes, author of Bob Marley: Lyrical Genius

"Professing slackness, Carolyn Cooper invites us to take seriously the local, the indigenous subject, Jamaican nation language and the feminist values in the lyrics of Shabba Ranks and Lady Saw. She insists that we recognise the overall emancipatory possibilities of Jamaican Dancehall culture. A monumental work, Sound clash will make waves, huge waves that Oya, Oshun and Yemoja the female Gods of great waters, Patron Divinities of Global African
cultures will certainly recognize as their own, and be proud of."--Oyeronke Oyewumi, author of The Invention of Women: Making an African Sense of Western Gender Discourses

CAROLYN COOPER is a Professor at the University of the West Indies, Mona, Jamaica. She is the author of Noises in the Blood.
Loading...
or support indie stores by buying on