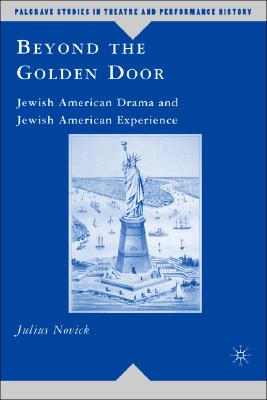 Beyond the Golden Door (Hardcover)

Beyond the Golden Door is the first book devoted to showing how Jewish playwrights of the twentieth century have dramatized the Jewish encounter with America. Questions dealt within this study include - How do you balance old world heritage with new world opportunity? What does it mean to be a Jew - or to be an American, for that matter?

JULIUS NOVICK is Emeritus Professor of Drama Studies at Purchase College, USA, and has also taught at Columbia, Harvard, and Julliard.

"Novick's book is an important tool for the scholar or student seeking to understand how Jewish Americans have struggled with their multiple identities onstage in front of a mainstream American audience."--Theatre Survey "Novick narrates quickly through the outline of each play and the breadth of works discussed is impressive.  Readers unfamiliar with the range of texts will still find themselves in deft hands: his prose is approachable, his analysis stimulating, his research thoughtful."--American Jewish History Association "Beyond the Golden Door is a learned, provocative survey of a significant strain in American theatre."--American Theatre "What a delight to read Julius Novick. He chooses exactly the right plays to focus on, lays out their substance with clarity, and then selects precisely the right quotes from his great predecessors and contemporary scholars in the field to heighten his own astute delvings into this extraordinary wealth of material.  Perceptively, he shows you how the plays link to one another to form one of the great chains that make up America's cultural DNA. This is a beautiful and necessary book."--Michael Feingold, chief theater critic, The Village Voice   "Novick articulately and knowledgeably demonstrates his own emotional stake in examining drama by American Jews. By linking the works he discusses to his deep personal feelings and values, he seems to be wrestling with the difficult task of trying to preserve a Jewish identity in a secular, multicultural American society...Novick’s passion for his subject informs Beyond the Golden Door from beginning to end."--The Jewish Daily Forward "Novick’s prose is highly readable. Beyond the Golden Door proves to be a treatise that fascinates and entertains even as it stimulates thought."--www.jewish-theatre.com

“An impressive display of the rich and varied contributions of Jewish playwrights to the American theatrical repertoire. With judiciously chosen examples, Novick demonstrates how, since the early twentieth century, plays about Jews have been moving and delighting audiences while showcasing the evolving challenges of being Jewish in America. This is a fine accounting of a significant component of American culture, a book to be hailed."--Ellen Schiff, author of From Stereotype to Metaphor: The Jew in Contemporary Drama; editor of Awake & Singing: Six Great American Jewish Plays

“Julius Novick offers a fascinating study of ethnic identity in America.  Though this story is about Jews, about their particular and distinctive story, it speaks to a much broader story about the American mosaic. In a century wracked by interethnic savagery around the world, this book gives some real insight into how and why America is different. Written with the same sparkle and wry wit that has graced Novick’s theater reviews over the years,  Beyond the Golden Door is an entertaining read as well as a serious  contribution to modern scholarship.”--Eileen Blumenthal, Professor of Theater Arts, Rutgers University; author of Puppetry: A World History "Novick summarizes each play with detail and clarity, and provides historical and biographical context to show how each play reflects its author’s milieu and life.”--Journal of the Association for Jewish Studies

"Novick's eloquent and jargon-free prose and his unerring eye for extracting meaningful quotations from the play at hand ensure that all readers can benefit from Beyond the Golden Door."--Modern Drama Review

"This study of Jewish American drama as it reflects Jewish American experience is the first book on the subject and a brilliant one: comprehensive, insightful, eloquent, and witty."--Jewish Book World

"Beyond the Golden Door is a great addition to a course on Jewish culture, or indeed any aspect of immigration and its consequences, because, in the end, Novick makes us wonder about the future of not just Jewish Americans, but all immigrants and the survival of all immigrant traditions in America, the Golden Land."--Theatre Journal

"Novick's thoughtful, at times humorous and carefully researched book covers the works of Jewish American playwrights beginning with Israel Zangwill's The Melting Pot in 1908...Using the Jewish American experience as a paradigm of that multiethnic country, Novick unlocks prominent cultural themes in the plays he studies."--The Jerusalem Post

"This is a volume that fills a major need in a highly distinguished manner, thanks to [the author] who has thought long and hard about its subject matter."--The Arts Fuse

"Well-researched, with an invaluable list of sources, the impressive study...discusses significant works by Jewish playwrights, analyzing them not only as ethnic creations but as links to each other and the world at large, showing how they mirror the struggle of all ethnicities."--Norwalk Hour