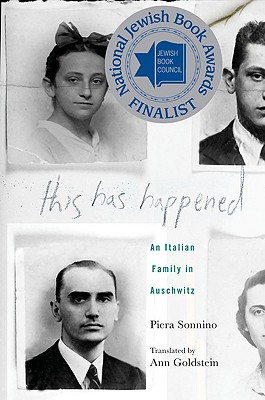 An Italian Family in Auschwitz

Five years after her return home from Auschwitz, Piera Sonnino found the courage to tell the story of the extermination of her parents, three brothers, and two sisters by the Nazis. Discovered one year ago in Italy and never before published in English, this poignant and extraordinarily well-written account is strikingly accurate in bringing to life the methodical and relentless erosion of the freedoms and human dignity of the Italian Jews, from Mussolini's racial laws of 1938 to the institutionalized horror of Auschwitz. Through Sonnino's words, memory has the power to disarm these unspeakable evils.


Praise For This Has Happened: An Italian Family in Auschwitz…

“In spare, beautifully translated language, Sonnino details her life in Genoa prior to 1938, when the racial laws went into effect.”--Publishers Weekly, Starred Review

Piera Sonnino was deported to Auschwitz in 1944. She was later transferred to Bergen-Belsen and Braunschweig. The sole survivor of a family of eight, she returned to Italy in 1950. She died in 1999. Ann Goldstein is an editor at the New Yorker. She has translated works by Roberto Calasso, Alessandro Baricco, Pier Paolo Pasolini, and Aldo Buzzi. The recipient of the PEN Renato Poggioli Translation Award, she is the editor of the forthcoming collected works of Primo Levi. She lives in New York.
Loading...
or
Not Currently Available for Direct Purchase