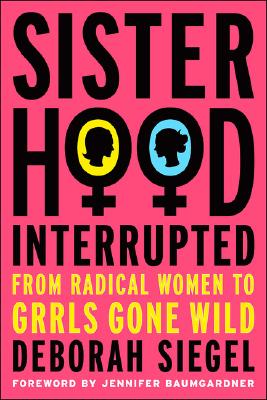 Contrary to clich's about the end of feminism, Deborah Siegel argues that younger women are not abandoning the movement but reinventing it. After forty years, is feminism today a culture, or a cause? A movement for personal empowerment, or broad-scale social change? Have women achieved equality, or do we still have a long way to go?

Deborah Siegel, PhD is a writer and consultant specializing in women's issues and a Fellow at the Woodhull Institute for Ethical Leadership. She is co-editor of the anthology Only Child: Writers on the Singular Joys and Solitary Sorrows of Growing Up Solo and has written about women, sex, contemporary families, and popular culture for a variety of publications. She has been featured in Psychology Today, The New York Times, USA Today, Time Out New York, and more.

"My hope is that after reading this book, you will have a deeper sense of many of the stories that make feminist history and philosophy, and you will use them to continue to figure out what feminism means to you."--from the foreword by Jennifer Baumgardner

"Siegel has her finger on the pulse of one of the main issues concerning women today: generational infighting around the unfinished business of feminism. It's an issue that concerns everyone--whether or not they use the f-word."--Catherine Orenstein, author of Red Riding Hood Uncloaked

"Sisterhood, Interrupted tells the history of conflicts within feminism without demonizing or blaming. Siegel conveys the excitement of feminism, then and now. She offers an informed and sympathetic perspective on the second wave that will help younger readers understand what it was like to be part of a movement that planned to change the world. And her framing of contemporary feminism will shape future conversations. Her explanations of what's happening now--the significant trends and controversies within the movement--provide a clarity that's lacking in the work of many feminist authors, from any generation. I couldn't put the book down."--Alison Piepmeier, co-editor of Catching a Wave: Reclaiming Feminism for the 21st Century

"Someone should make a t-shirt for Deborah Siegel that says, 'This is what a feminist historian looks like'...a thorough and engaging narrative."--Merri Lisa Johnson, author of Jane Sexes It Up "A] fascinating new book . . . [a] thorough history of the infighting that has gone on within the feminist movement." --Huffington Post "A very good book about how modern feminism has fared across the
generational divide. It's a helluva yarn." --New York Observer "[M]ost serious...and satisfying." --Library Journal  "Siegel packs substantial material into 170 pages, and the result is a succinct history perfect for introductory college courses or for women wanting to learn more about various permutations of feminism. In revisiting its history, Siegel reclaims "the f-word," and invites her readers to do so along with her." --On Campus with Women "Sisterhood, Interrupted is authoritative, informative, and fast-moving, making it perfect summer reading for anyone ready for an original and optimistic perspective on the women's movement and how to bridge the ideological gap between younger and older feminists. This book is also required reading for anyone interested in getting feminism out of its current rut, and (re)organizing women for change." --Mothers Movement Online

"With a readable, engaging style, Siegel takes feminist history, the good, the bad, and the vicious, and tells us what happened and why we should care. Her very careful, nuanced, play-by-play account of the early years and struggles of the second wave feminist movement, as well as documentation of the third wave's origins and modern incarnations, is vital in an era when women are constantly pitted against each other, whether it's young vs. old, stay at home moms vs. working moms, feminists vs. non-feminists, etc. Siegel doesn't shy away from the truly bitter divides that cropped up in the second wave. . . and in doing so brings needed attention to the causes women were and are fighting for." - Rachel Kramer Bussel, Lusty Lady