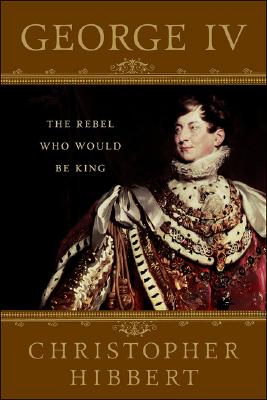 The Rebel Who Would Be King

Hibbert delivers a superbly detailed picture of the life and times of George IV including his exorbitant spending on his homes, his clothes, and his women; his patronage of the arts; his "illegal" marriage to Catholic Mrs Fitzherbert, and lesser known facts such as his generous charity donations and his witty one-liners, including one he uttered when he met his bride-to-be (Caroline of Brunswick) for the first time: "Harris, I am not well, fetch me a brandy." George IV was the son of George III (who went insane and inspired "The Madness of King George") and was the founder of the prestigious King's College in London.


Praise For George IV: The Rebel Who Would Be King…

"Christopher Hibbert's George IV is at once soundly based on research in the Royal Archives at Windsor and a rollicking good read. I found it invaluable when I was researching The Unruly Queen, my life of George IV's wife, Queen Caroline, and I recommend it to anyone interested by George IV's flamboyant and outrageous personality."--Flora Fraser "This is one of the most satisfying biographies of an English king: it is ample, convincing and well written."--The Times Literary Supplement

CHRISTOPHER HIBBERT, "a pearl of biographers" ("New Statesman), " is a Fellow of the Royal Society of Literature and the author of "Disraeli " (Palgrave Macmillan), "The Rise and Fall of the House of Medici, " "The English: A Social History, "and "Cavaliers and Roundheads." He lives in Oxfordshire, England.
Loading...
or
Not Currently Available for Direct Purchase