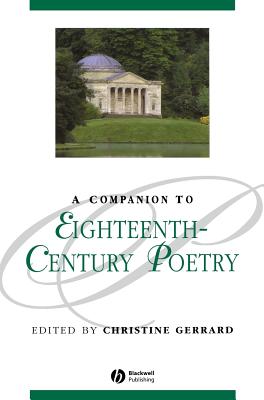 A COMPANION TO & EIGHTEENTH-CENTURY POETRY

A COMPANION TO & EIGHTEENTH-CENTURY POETRY
Edited by Christine Gerrard

This wide-ranging Companion reflects the dramatic transformation that has taken place in the study of eighteenth-century poetry over the past two decades. New essays by leading scholars in the field address an expanded poetic canon that now incorporates verse by many women poets and other formerly marginalized poetic voices. The volume engages with topical critical debates such as the production and consumption of literary texts, the constructions of femininity, sentiment and sensibility, enthusiasm, politics and aesthetics, and the growth of imperialism.

The Companion opens with a section on contexts, considering eighteenth-century poetry's relationships with such topics as party politics, religion, science, the visual arts, and the literary marketplace. A series of close readings of specific poems follows, ranging from familiar texts such as Pope's The Rape of the Lock to slightly less well-known works such as Swift's "Stella" poems and Lady Mary Wortley Montagu's Town Eclogues. Essays on forms and genres, and a series of more provocative contributions on significant themes and debates, complete the volume. The Companion gives readers a thorough grounding in both the background and the substance of eighteenth-century poetry, and is designed to be used alongside David Fairer and Christine Gerrard's Eighteenth-Century Poetry: An Annotated Anthology (3rd edition, 2014).

Christine Gerrard is Fellow and Tutor in English at Lady Margaret Hall, Oxford University. She is the author of The Patriot Opposition to Walpole: Politics, Poetry, and National Myth, 1725-1742 (1994) and Aaron Hill: The Muses' Projector, 1685-1750 (2003). She is the co-editor, with David Fairer, of Eighteenth-Century Poetry: An Annotated Anthology (Blackwell, second edition, 2003).
Loading...
or support indie stores by buying on