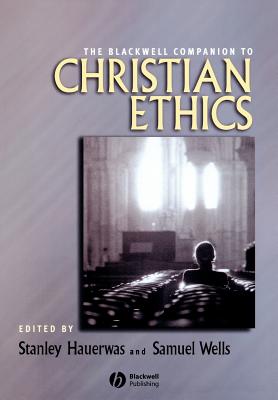 The Blackwell Companion to Christian Ethics presents a comprehensive and systematic exposition of Christian ethics, seen through the lens of Christian worship.

Stanley Hauerwas is Gilbert T. Rowe Professor of Theological Ethics at the Divinity School, Duke University, North Carolina. He is regarded as a, if not the, leading figure in Christian ethics. His book, A Community of Character: Toward a Constructive Christian Social Ethic, was selected as one of the 100 most important books on religion of the twentieth century. He is one of the most brilliant and original thinkers of his generation. He has written numerous books including: The Peaceable Kingdom (1983), A Community of Character (1981), Resident Aliens (1989), Christians Among the Virtues (1997), Wilderness Wanderings: Probing Twentieth Century Theology (1997), Sanctify Them in the Truth (1998), and With the Grain of the Universe: the Church's Witness and Natural Theology (2001). Samuel Wells is Priest-in-Charge of St Mark's, Newnham, Cambridge, and a writer in theological ethics. He has published several books, including Transforming Fate into Destiny (1998), Faithfulness and Fortitude (2000), and Improvisation and the Drama of Christian Ethics (2004).
Loading...
or support indie stores by buying on