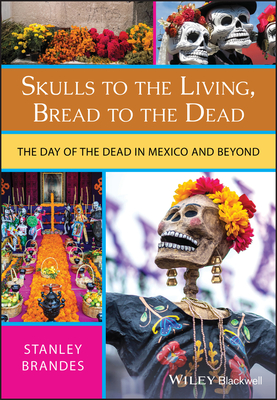 Skulls to the Living, Bread to the Dead

The Day of the Dead in Mexico and Beyond

Each October, as the Day of the Dead draws near, Mexican markets overflow with decorated breads, fanciful paper cutouts, and whimsical toy skulls and skeletons. To honor deceased relatives, Mexicans decorate graves and erect home altars. Drawing on a rich array of historical and ethnographic evidence, this volume reveals the origin and changing character of this celebrated holiday. It explores the emergence of the Day of the Dead as a symbol of Mexican and Mexican-American national identity.

Skulls to the Living, Bread to the Dead poses a serious challenge to the widespread stereotype of the morbid Mexican, unafraid of death, and obsessed with dying. In fact, the Day of the Dead, as shown here, is a powerful affirmation of life and creativity. Beautifully illustrated, this book is essential for anyone interested in Mexican culture, art, and folklore, as well as contemporary globalization and identity formation.

STANLEY BRANDES received his PhD in Anthropology from the University of California, Berkeley, where he has taught since 1974. He is the author of numerous publications on religion, society, and culture in Spain and Mexico, including, most recently, Staying Sober in Mexico City (2002).
Loading...
or
Not Currently Available for Direct Purchase