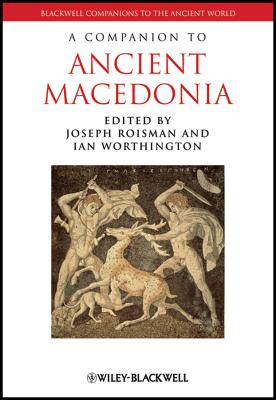 Companion to Ancient Macedonia (Blackwell Companions to the Ancient World)

The most comprehensive and up-to-date work available on ancient Macedonian history and material culture, A Companion to Ancient Macedonia is an invaluable reference for students and scholars alike.

Joseph Roisman is Professor of Classics at Colby College. He has authored and edited several books, among them Brill's Companion to Alexander the Great (ed., 2003), The Rhetoric of Manhood: Masculinity in the Attic Orators (2005), and Ancient Greece from Homer to Alexander: The Evidence (ed. with J.C. Yardley, Wiley-Blackwell, 2010). Ian Worthington is Curators' Professor of History, Department of History, University of Missouri. He has written and edited numerous books and articles on Greek history, epigraphy and oratory, including Alexander the Great: Man and God (2004), The Blackwell Companion to Greek Rhetoric (ed., Wiley-Blackwell, 2006) and Philip II of Macedonia (2008).
Loading...
or support indie stores by buying on