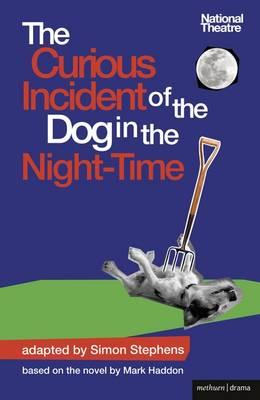 My name is Christopher John Francis Boone. I know all the countries of the world and the capital cities. And every prime number up to 7507.

Christopher, fifteen years old, stands beside Mrs Shears's dead dog. It has been speared with a garden fork, it is seven minutes after midnight, and Christopher is under suspicion. He records each fact in the book he is writing to solve the mystery of who murdered Wellington. He has an extraordinary brain and is exceptional at maths, but he is ill-equipped to interpret everyday life. He has never ventured alone beyond the end of his road, he detests being touched and he distrusts strangers. But Christopher's detective work, forbidden by his father, takes him on a frightening journey that turns his world upside-down. Simon Stephens's adaptation of Mark Haddon's bestselling, award-winning novel, The Curious Incident of the Dog in the Night-time offers a richly theatrical exploration of this touching and bleakly humorous tale. This edition contains some strong language and may not be suitable for all school curricula. Other editions are available.

Mark Haddon's work as an author includes A Spot of Bother, The Curious Incident of the Dog in the Night-time, The Real Porky Philips, Agent Z and Titch Johnson - Almost World Champion. His work for television includes Coming Down the Mountain, Fungus the Bogeyman and Microsoap. Polar Bears (2010) was Mark Haddon's first work for the theatre. Simon Stephens has been the recipient of both the Pearson Award for Best New Play 2001-2 for his play Port, and the Olivier Award for Best New Play 2005 for On the Shore of the Wide World. His recent plays include Harper Regan (National Theatre), Punk Rock (Lyric Hammersmith/Royal Exchange, Manchester), Pornography (Traverse and Birmingham Rep), Wastwater (Royal Court and Wiener Festwochen), The Trial of Ubu (Hampstead Theatre) and Three Kingdoms (Lyric Hammersmith).
Loading...
or support indie stores by buying on