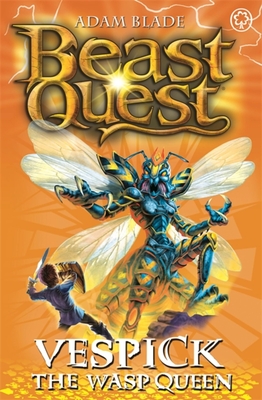 Battle fearsome beasts and fight evil with Tom and Elenna in the bestselling adventure series for boys and girls aged 7 and up.

Tom has nearly reached the end of his most challenging Beast Quest! The fate of his mother and the land of Kayonia depend on him and his faithful companions. Can he defeat the deadliest of his foes, Vespick the Wasp Queen, and wicked Wizard Velmal?

There are SIX thrilling adventures to collect in the Beast Quest: The World of Chaos series: Komodo the Lizard King; Muro the Rat Monster; Fang the Bat Fiend; Murk the Swamp Man; Terra Curse of the Forest; Vespick the Wasp Queen.

If you like Beast Quest, check out Adam Blade's other series: Team Hero, Sea Quest and Beast Quest: New Blood!

Adam Blade is the name for a small collective of authors who have been writing the bestselling series Beast Quest and Sea Quest for ten years! Beast Quest has now sold over 10 million copies. The newest series from the Adam Blade team is called Team Hero - it launches in Summer 2017.

You can find out more about all these amazing adventures at the series websites: seaquestbooks.co.uk and teamherobooks.co.uk