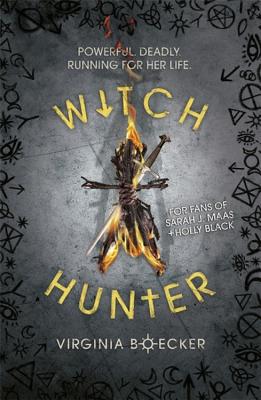 Sixteen-year-old Elizabeth Grey doesn't look dangerous. A tiny, blonde, wisp of a girl shouldn't know how to poison a wizard and make it look like an accident. Or take out ten necromancers with a single sword and a bag of salt. Or kill a man using only her thumb. But things are not always as they appear. Elizabeth is one of the best witch hunters in Anglia and a member of the king's elite guard, devoted to rooting out witchcraft and bringing those who practise it to justice. And in Anglia, the price of justice is high: death by burning.

When Elizabeth is accused of being a witch herself, she's arrested and thrown in prison. The king declares her a traitor and her life is all but forfeit. With just hours before she's to die at the stake, Elizabeth gets a visitor - Nicholas Perevil, the most powerful wizard in Anglia. He offers her a deal: he will free her from prison and save her from execution if she will track down the wizard who laid a deadly curse on him.

As Elizabeth uncovers the horrifying facts about Nicholas's curse and the unwitting role she played in its creation, she is forced to redefine the differences between right and wrong, friends and enemies, love and hate... and life and death.

The first book in an incredible new series set in a fantastical medieval world.

Virginia Boecker recently spent four years in London obsessing over English medieval history. She now lives in the Bay Area, California with her husband and spends her days writing, reading, running, and chasing around her two children and a dog named George. In addition to English kings, nine-day queens, and Protestant princesses, her other obsessions include The Smiths, art museums, champagne, and Chapstick. You can visit Virginia online at virginiaboecker.com or on Twitter @virgboecker.
Loading...
or
Not Currently Available for Direct Purchase