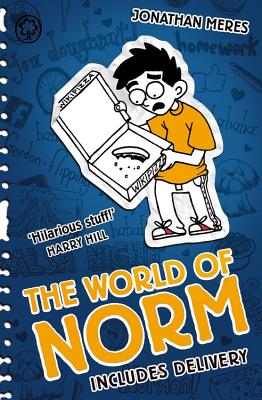 The World of Norm

The tenth hilarious title in the award-winning, laugh-out-loud series, The World of Norm. Perfect for fans of Tom Gates and Diary of a Wimpy Kid.

Norm knew it was going to be one of those days when he lost his house...

But even when he finds it, things don't get much better. What could be worse than imagining your parents at a salsa dancing event - with your best friend?! Norm's not sure what's got into Mikey, but he suspects hormones may be involved. Flipping typical!

With brilliantly funny illustrations throughout from Donough O'Malley.

A barrel of laughs.—Dunoon Observer and Argyllshire Standard

Fans of Jeff Kinney will not be disappointed.—Books for Keeps

Jonathan Meres is a former merchant seaman, ice-cream van driver and Perrier Award-nominated stand-up comedian. As a writer he's written for TV and radio, but is best known for being the author of over 30 books for children and in particular his best-selling, award-winning series, The World Of Norm, which has so far been translated into 16 languages worldwide.

Jonathan's hugely entertaining live performances ensure that he's in constant demand at school and book festivals throughout the UK and beyond. Find out more at www.jonathanmeres.com