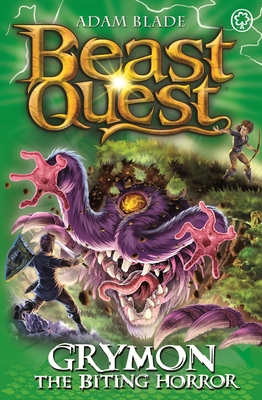 Battle fearsome beasts and fight evil with Tom and Elenna in the bestselling adventure series for boys and girls aged 7 and up.

The Dark Wizard Malvel is using ancient magic to summon four Beasts from the Netherworld! First, Tom and Elenna must tackle Grymon, a Beast that can claw its way through solid earth...

There are FOUR thrilling adventures to collect in this series - don't miss out! Grymon the Biting Horror; Skrar the Night Scavenger; Tarantix the Bone Spider and Lypida the Shadow Fiend.

If you like Beast Quest, check out Adam Blade's other series: Team Hero, Sea Quest and Beast Quest: New Blood!

Adam Blade is the name for a small collective of authors who have been writing the bestselling series Beast Quest and Sea Quest for ten years! Beast Quest has now sold over 10 million copies. The newest series from the Adam Blade team is called Team Hero.

You can find out more about all these amazing adventures at the series websites: beastquest.co.uk and teamherobooks.co.uk