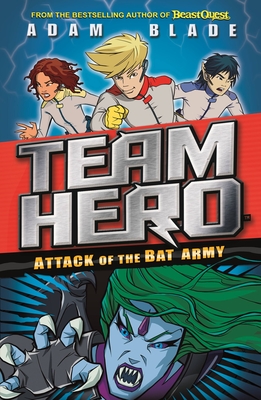 There's a new evil escaping from the dark realm of Noxx. Jack and Team Hero must harness their special powers to stop the bat army from destroying the world.

Team Hero needs you! Join Jack and battle the forces of darkness ...

There are FOUR thrilling adventures to collect in this series - don't miss out! Battle for the Shadow Sword; Attack of the Bat Army; Reptile Reawakened; and The Skeleton Warrior

Adam Blade is the name for a small collective of authors who have been writing the bestselling series Beast Quest and Sea Quest for ten years! Beast Quest has now sold over 10 million copies. The newest series from the Adam Blade team is called Team Hero.

You can find out more about all these amazing adventures at the series websites: beastquest.co.uk and teamherobooks.co.uk

...this, the start of a new series, holds great promise. X-Men meets Beast Quest at the school for superheroes - and it's all told with comic-book style illustrations which will appeal greatly to the target audience, and make the book accessible for even reluctant readers.—Parents in Touch
or support indie stores by buying on
Copyright © 2020 American Booksellers Association