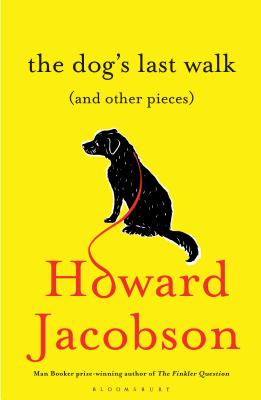 Hilarious, heartbreaking, provocative, and affecting--Howard Jacobson's irresistible journalism from the Independent reveals the Man Booker Prize-winning novelist in all his humanity.

From the tiniest absurdities to the most universal joys and desolations, Jacobson writes with a thunder, passion, and wit unmatched. Just as did his previous volume, Whatever It Is, I Don't Like It, this glorious, unputdownable collection will delight, entertain, challenge, and move.


Praise For The Dog's Last Walk: (and Other Pieces)…

“A large part of the enjoyment one gets from reading these pieces (written largely between 2010 and 2016) is seeing a wit and intellect such as Jacobson digest and illuminate contemporary life. The author's prose is always a delight, as he dispenses immaculately formulated bon mots with an uncanny regularity.” - Times Literary Supplement

“A collection of mini-essays from one of England's finest writers . . . An ever gorgeous and witty writer with his own fierce opinions, Jacobson runs the gamut from Matisse, Leonard Cohen's fedora, and Andy Murray to children's literature, table tennis, and the 'wise decision' of shooting Osama bin Laden . . . A delightful and argute collection from a talented stylist.” - Kirkus Reviews

“In the end, these pieces were written as weekly installments. They were never intended to be read in one fell swoop. They are short, pithy, and fun. They don't take themselves too seriously but, at the same time, they often provoke some significant reflection. This is the kind of book you should dip into periodically for its subtle complexity and entertainment value.” - Washington Independent Review of Books

“This second collection of [Jacobson's] newspaper pieces is a reminder of just how good they were: sharp and playful, surreal and thoughtful, and occasionally . . . rather moving.” - New Statesman

“Funny, argumentative, contrary and stuffed with ideas as well as a big, sympathetic personality . . . All too often, newspaper columnists write in order to elicit the established response from as coterie whose beliefs and prejudices they already know. Jacobson was satisfying because he always gave the impression of writing to start a discussion at least, an argument on a good day, even a proper fight.” - Spectator

An award-winning writer and broadcaster, Howard Jacobson was born in Manchester, brought up in Prestwich, and was educated at Stand Grammar School in Whitefield, and Downing College, Cambridge, where he studied under F. R. Leavis. He lectured for three years at the University of Sydney before returning to teach at Selwyn College, Cambridge. His novels include The Mighty Walzer (winner of the Bollinger Everyman Wodehouse Prize), Kalooki Nights (longlisted for the Man Booker Prize), the highly acclaimed The Act of Love, and the 2010 Man Booker Prize-winning The Finkler Question. He lives in London.
Loading...
or
Not Currently Available for Direct Purchase