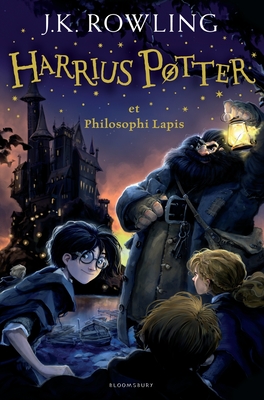 The first words of J.K. Rowling's timeless classic are more familiar to readers as 'Mr and Mrs Dursley, of number four, Privet Drive ...' Following in the steps of other great children's classics, including Winnie the Pooh (winnie ille pu) and Paddington Bear (ursus nomine paddington), Harry Potter and the Philosopher's Stone is available in Latin. Learners and lovers of Latin will delight in Peter Needham's sparkling translation, which perfectly captures the wit and invention of J.K. Rowling's original, now reissued with stunning new cover art from Jonny Duddle.

“The translation is great stuff. It is accurate and fluent, but it is much more than that. It has been carried off with wit, inventiveness, sensitivity and panache. I find it impossible to think of it being better done” —James Morwood, Oxford University

J.K. Rowling was born in England in 1965. She always loved writing more than anything else, and in 1996, one year after finishing it, Bloomsbury bought her first novel, Harry Potter and the Sorcerer’s Stone. Millions of copies later…the rest is Hogwart’s history.

Peter Needham taught Classics at Eton for over 30 years. He has also translated Paddington Bear into Latin, 'Ursus Nomine Paddington.' He lives in Slough, in England.
or
Not Currently Available for Direct Purchase