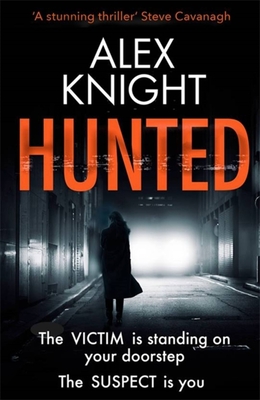 You're woken early by the doorbell. It's a young girl, the daughter of the love of your life. She's scared, covered in blood, she says her mother is hurt.

You let her in, try to calm her down, tell her you're going to get help. You reach for your phone, but it lights up with a notification before you touch it.

It's an Amber alert - a child has been abducted by a dangerous suspect.

The child is the girl standing in front of you.

I loved it. This has an astonishing opening and just gets better and better. A stunning thriller.—Steve Cavanagh

Jolts and shocks like a claustrophobic rollercoaster. Knight could be the Hitchcock of the 21st Century. Hide-behind-the-sofa compelling!—Denzil Meyrick

One of the most compulsive openings I've read in ages. I devoured Hunted in one big gulp. A well-crafted, tightly-plotted thriller that races from the streets of San Francisco to the coast without pausing for breath. Atmospheric and absorbing with great characters and an eye for detail that made each scene come alive, this was a damn good read that I found impossible to put down.—CJ Carver

They don't come better than this. One of those thrillers that really and truly thrills! A masterclass from Alex Knight.—Tony Kent

Brilliant. Opens at a breakneck speed and does not let up.—Lara Dearman

Amazing opening and just gets better and better.—Jenny Blackhurst

Alex Knight is a British novelist who lives near Glasgow with his wife and three children.
Loading...
or support indie stores by buying on