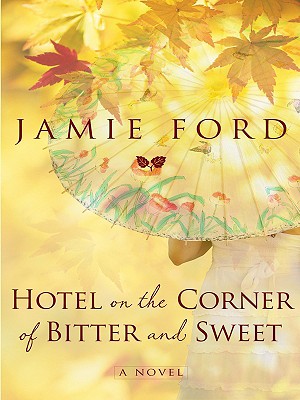 Hotel on the Corner of Bitter and Sweet (Thorndike Core)

“In 1986, Henry Lee happens upon the Panama Hotel in Seattle, where discoveries in the basement bring back haunting memories of the 1940s. Hotel on the Corner of Bitter and Sweet tells of family pride, innocence, young love, jazz clubs, and internment. This novel will delight all ages -- it's good for reading aloud and great for discussions.”
— Barbara Theroux, Fact & Fiction, Missoula, MT
View the List

“The Japanese internment of WWII comes alive in this timeless story, set in 1940s Seattle, of the power of the human heart to rise above hatred and bigotry. This is a book to share with others.”
— Marilyn Scheer, East West Bookshop, Seattle, WA
View the List

This debut novel tells a heartwarming story of fathers and sons, first loves, fate, and the resilient human heart. Set in the ethnic neighborhoods of Seattle during World War II and Japanese American internment camps of the era, the times and places are brought to life (Jim Tomlinson, author of Things Kept, Things Left Behind).