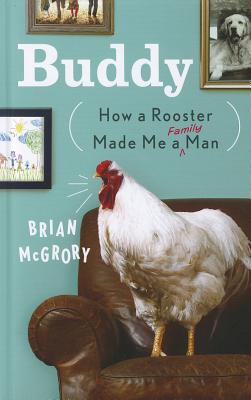 Award-winning journalist Brian McGrory goes head to beak in a battle royale with another male for a top-spot in his home, vying for dominance with the family's pet rooster.
Brian McGrory's life changed drastically after the death of his beloved dog, Harry: he fell in love with Pam, Harry's veterinarian. Though Brian's only responsibility used to be his adored Harry, Pam came with accessories that could not have been more exotic to the city-loving bachelor: a home in suburbia, two young daughters, two dogs, two cats, two rabbits, and a portly, snow white, red-crowned-and-wattled step-rooster named Buddy. While Buddy loves the women of the house, he takes Brian's presence as an affront, doing everything he can to drive out his rival. Initially resistant to elements of his new life and to the loud, aggressive rooster (who stares menacingly, pecks threateningly, and is constantly poised to attack), Brian eventually sees that Buddy shares the kind of extraordinary relationship with Pam and her two girls that he wants for himself. The rooster is what Brian needs to be - strong and content, devoted to what he has rather than what might be missing. As he learns how to live by living with animals, Buddy, Brian's nemesis, becomes Buddy, Brian's inspiration, in this inherently human story of love, acceptance, and change.
In the tradition of bestsellers like "Marley and Me, Dewey," and" The Tender Bar" comes a heartwarming and wise tale of finding love in life's second chapter - and how it means all the more when you have to fight for it.

Brian McGrory is a longtime newspaper reporter, editor, and columnist. Born and raised in and around Boston, he went to college at Bates College in Maine. He worked for the "Patriot Ledger" in Quincy, the "New Haven Register" in Connecticut, and has written for and edited the "Boston Globe" since 1989. He has a twice weekly column that appears on the front of the metro section, for which he has won the Scripps Howard journalism award, and is the author of four novels. He lives in Massachusetts with his "entire" family.
or
Not Currently Available for Direct Purchase
Copyright © 2020 American Booksellers Association