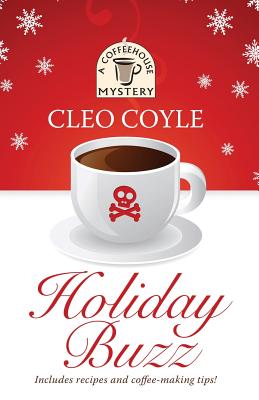 "THE "NEW YORK TIMES "BESTSELLING COFFEEHOUSE MYSTERY
Holiday time is party time in New York City, but after a sparkling winter bash ends with a murder, Village Blend coffeehouse manager Clare Cosi vows to put the killer on ice..." At the Great New York Cookie Swap, pastry chefs bake up their very best for charity. Clare is in charge of the beverage service, and her famous Fa-la-la-la Lattes make the gathering even merrier. But her high spirits come crashing down to earth, when she discovers the battered body of a hard-working baker's assistant. Police suspect a serial attacker whose escalating crimes have become known as "The Christmas Stalkings." Clare's boyfriend, NYPD detective Mike Quinn, finds reason to believe even more sinister forces are involved. Clare isn't so sure--and when she finds a second bludgeoned baker, she becomes a target. Now Clare is spending the holiday season pouring over clues, and she's not going to rest until justice is served. Includes holiday and cookie recipes.

Cleo Coyle is the pen name for a multipublished author who collaborates with her husband to write the nationally bestselling Coffeehouse Mysteries. Although they did not meet until adulthood, Cleo and her husband had very similar upbringings. Both were children of food-loving Italian immigrants, and both grew up in working-class neighborhoods outside of Pittsburgh, Pennsylvania, before moving to the Big Apple to begin their postcollege careers: Cleo as a journalist and children's book and media tie-in author; and her husband as a magazine editor and writer. After finally meeting and falling in love, they married at the Little Church of the West in Las Vegas. Now they live and work in New York City, where they each write books independently and together, cook like crazy, haunt local coffeehouses, and drink a lot of joe. Among their many coauthored projects are the Haunted Bookshop Mysteries, written under the pen name Alice Kimberly.