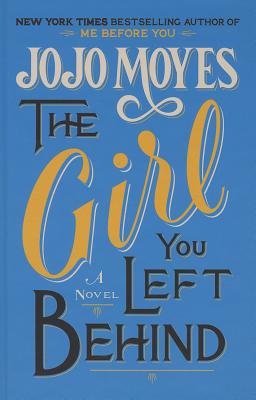 The Girl You Left Behind (Thorndike Core) (Hardcover)

From the "New York Times"-bestselling author of "Me Before You," a spellbinding love story of two women separated by a century but united in their determination to fight for what they love most
Jojo Moyes's bestseller, "Me Before You," catapulted her to wide critical acclaim and has struck a chord with readers everywhere. "Hopelessly and hopefully romantic" ("Chicago Tribune"), Moyes returns with another irresistible heartbreaker that asks, "Whatever happened to the girl you left behind?"
France, 1916: Artist Edouard Lefevre leaves his young wife, Sophie, to fight at the front. When their small town falls to the Germans in the midst of World War I, Edouard's portrait of Sophie draws the eye of the new Kommandant. As the officer's dangerous obsession deepens, Sophie will risk everything--her family, her reputation, and her life--to see her husband again.
Almost a century later, Sophie's portrait is given to Liv Halston by her young husband shortly before his sudden death. A chance encounter reveals the painting's true worth, and a battle begins for who its legitimate owner is--putting Liv's belief in what is right to the ultimate test.
Like Sarah Blake's "The Postmistress" and Tatiana de Rosnay's "Sarah's Key," "The Girl You Left Behind" is a breathtaking story of love, loss, and sacrifice told with Moyes's signature ability to capture our hearts with every turn of the page.

Jojo Moyes is the "New York Times" bestselling author of "The Girl You Left Behind," "Honeymoon in Paris," "Me Before You," and "The Last Letter from Your Lover." Moyes writes for a variety of newspapers and magazines. She is married to Charles Arthur, technology editor of "The Guardian." They live with their three children on a farm in Essex, England.
or
Not Currently Available for Direct Purchase
Copyright © 2020 American Booksellers Association