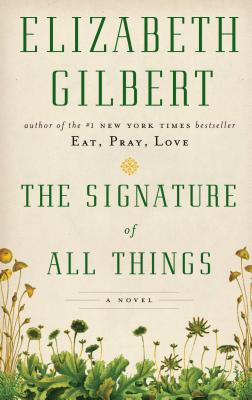 A glorious, sweeping novel of desire, ambition, and the thirst for knowledge, from the # 1 "New York Times" bestselling author of "Eat, Pray, Love" and "Committed"
In "The Signature of All Things," Elizabeth Gilbert returns to fiction, inserting her inimitable voice into an enthralling story of love, adventure and discovery. Spanning much of the eighteenth and nineteenth centuries, the novel follows the fortunes of the extraordinary Whittaker family as led by the enterprising Henry Whittaker--a poor-born Englishman who makes a great fortune in the South American quinine trade, eventually becoming the richest man in Philadelphia. Born in 1800, Henry's brilliant daughter, Alma (who inherits both her father's money and his mind), ultimately becomes a botanist of considerable gifts herself. As Alma's research takes her deeper into the mysteries of evolution, she falls in love with a man named Ambrose Pike who makes incomparable paintings of orchids and who draws her in the exact opposite direction--into the realm of the spiritual, the divine, and the magical. Alma is a clear-minded scientist; Ambrose a utopian artist--but what unites this unlikely couple is a desperate need to understand the workings of this world and the mechanisms behind all life.
Exquisitely researched and told at a galloping pace, "The Signature of All Things" soars across the globe--from London to Peru to Philadelphia to Tahiti to Amsterdam, and beyond. Along the way, the story is peopled with unforgettable characters: missionaries, abolitionists, adventurers, astronomers, sea captains, geniuses, and the quite mad. But most memorable of all, it is the story of Alma Whittaker, who--born in the Age of Enlightenment, but living well into the Industrial Revolution--bears witness to that extraordinary moment in human history when all the old assumptions about science, religion, commerce, and class were exploding into dangerous new ideas. Written in the bold, questing spirit of that singular time, Gilbert's wise, deep, and spellbinding tale is certain to capture the hearts and minds of readers.

Elizabeth Gilbert is an award-winning writer of both fiction and nonfiction. Her short story collection, "Pilgrims," was a finalist for the PEN/Hemingway Award, and her novel, "Stern Men," was a "New York Times" Notable Book. Her 2002 book, "The Last American Man," was a finalist for both the National Book Award and the National Book Critics Circle Award. She is best known for her 2006 memoir, "Eat, Pray, Love," which has been published in more than thirty languages; a film based on the memoir, starring Julia Roberts, opened in August 2010. Her most recent book, the memoir "Committed: A Love Story," appeared in 2010. In 2008, "Time" magazine named Gilbert one of the most influential people in the world. Her Web site is www.elizabethgilbert.com.
Loading...
or
Not Currently Available for Direct Purchase