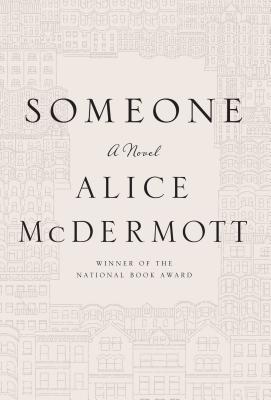 “'Who's going to love me? Marie asks her brother after being dumped by her first boyfriend. 'Someone,' he tells her. 'Someone will.' Love is only one of the themes that weave together these non-linear stories in Alice McDermott's latest mesmerizing novel. The tale is told through Marie's memories, as a little girl, an old woman, a mother. Snapshot after snapshot of events in a Brooklyn neighborhood come together seamlessly to tell the endlessly fascinating story of someone's life. -- Sharon K. Nagel, Boswell Book Company, Milwaukee, WI”
— Sharon K. Nagel, Boswell Book Company, Milwaukee, WI
View the List

A fully realized portrait of one woman's life in all its complexity, by the National Book Award-winning author
An ordinary life--its sharp pains and unexpected joys, its bursts of clarity and moments of confusion--lived by an ordinary woman: this is the subject of "Someone," Alice McDermott's extraordinary return, seven years after the publication of "After This." Scattered recollections--of childhood, adolescence, motherhood, old age--come together in this transformative narrative, stitched into a vibrant whole by McDermott's deft, lyrical voice.
Our first glimpse of Marie is as a child: a girl in glasses waiting on a Brooklyn stoop for her beloved father to come home from work. A seemingly innocuous encounter with a young woman named Pegeen sets the bittersweet tone of this remarkable novel. Pegeen describes herself as an "amadan," a fool; indeed, soon after her chat with Marie, Pegeen tumbles down her own basement stairs. The magic of McDermott's novel lies in how it reveals us all as fools for this or that, in one way or another.
Marie's first heartbreak and her eventual marriage; her brother's brief stint as a Catholic priest, subsequent loss of faith, and eventual breakdown; the Second World War; her parents' deaths; the births and lives of Marie's children; the changing world of her Irish-American enclave in Brooklyn--McDermott sketches all of it with sympathy and insight. This is a novel that speaks of life as it is daily lived; a crowning achievement by one of the finest American writers at work today.

Alice McDermott is the author of six previous novels, including "After This"; "Child of My Heart"; "Charming Billy," winner of the 1998 National Book Award; and "At Weddings and Wakes," all published by FSG. "That Night," "At Weddings and Wakes," and "After This" were all finalists for the Pulitzer Prize. McDermott lives with her family outside Washington, D.C.
Loading...
or
Not Currently Available for Direct Purchase