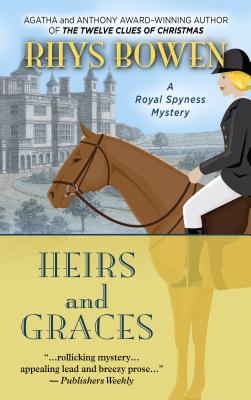 "As thirty-fifth in line for the throne, Lady Georgiana Rannoch may not be the most sophisticated young woman, but she knows her table manners. It's forks on the left, knives on the right--not in His Majesty's back..."
Here I am thinking the education I received at my posh Swiss finishing school would never come in handy. And while it hasn't landed me a job, or a husband, it has convinced Her Majesty the Queen and the Dowager Duchess to enlist my help. I have been entrusted with grooming Jack Altringham--the Duke's newly discovered heir fresh from the Outback of Australia--for high society.
The upside is I am to live in luxury at one of England's most gorgeous stately homes. But upon arrival at Kingsdowne Place, my dearest Darcy has been sent to fetch Jack, leaving me stuck in a manor full of miscreants...none of whom are too pleased with the discovery of my new ward.
And no sooner has the lad been retrieved than the Duke announces he wants to choose his own heir. With the house in a hubbub over the news, Jack's hunting knife somehow finds its way into the Duke's back. Eyes fall, backs turn, and fingers point to the young heir. As if the rascal wasn't enough of a handful, now he's suspected of murder. Jack may be wild, but I'd bet the crown jewels it wasn't he who killed the Duke...

Rhys Bowen has been nominated for every major award in mystery writing, including the Edgar(R), and has won many, including both the Agatha and Anthony awards. She is also the author of the Molly Murphy Mysteries, set in turn-of-the-century New York, and the Constable Evans Mysteries, set in Wales. She was born in England and now divides her time between Northern California and Arizona.
Loading...
or
Not Currently Available for Direct Purchase