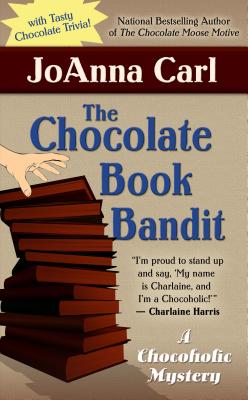 "When it turns out a member of Warner Pier's library board has been living on borrowed time, Lee is determined to discover who wrote the victim's final chapter..."
Running TenHuis Chocolade keeps Lee McKinney Woodyard busy enough, but now she's been offered two different positions in the town of Warner Pier--one on the tourism committee and another on the library board. To decide between the two, she goes to Warner Pier's historic library to check out the board's monthly meeting.
As usual, rumors are flying through the small town--this time, they're about the rugged new library director, Henry "Butch" Cassidy, and the changes he allegedly plans to make. Butch is indeed attractive--but Lee doesn't get a chance to find out about his proposed changes. A few minutes into the meeting, the discussion is interrupted by the terrified screams of the library clerk.
She has discovered the lifeless body of Abigail VanRoostock, a prim and proper retiring member of the board, crumpled in a heap at the bottom of the basement stairs. Suddenly, everyone in attendance, including Lee, is suspected in her murder. And as Lee finds out, they've all got something to hide...
INCLUDES TASTY CHOCOLATE TRIVIA

JoAnna Carl is the pseudonym for a multipublished mystery writer. She spent more than twenty-five years in the newspaper business as a reporter, feature writer, editor, and columnist. She holds a degree in journalism from the University of Oklahoma and also studied in the OU Professional Writing Program.
or
Not Currently Available for Direct Purchase
Copyright © 2020 American Booksellers Association