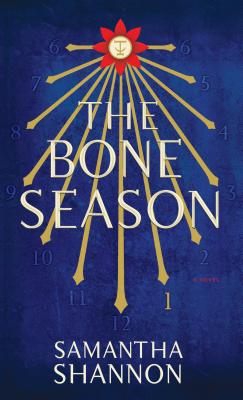 It appeared on every summer reading list for 2013, from "Entertainment Weekly" to "USA Today." Now, the debut that thrilled readers everywhere is available in paperback. Enter the world of Paige Mahoney, a gifted clairvoyant, a "dreamwalker," in the year 2059. Her natural talents are considered treasonous under the current regime. Snatched away to a secret prison, she encounters another race, the Rephaim, creatures who wish to control the powers of Paige and those like her. One in particular will be assigned as her keeper, her trainer. But his motives are mysterious. To regain her freedom, Paige must learn to trust, in the prison where she is meant to die.

Samantha Shannon was born in West London in 1991. She started writing at the age of fifteen and graduated from St. Anne's College, Oxford, with a degree in English language and literature in 2013. "The Bone Season" is her first novel and has been sold in twenty-one countries. It is being developed for film by Andy Serkis and Jonathan Cavendish at Imaginarium Studios.Follow Samantha Shannon on Twitter at @say_shannon and on her blog, www.samanthashannon.co.uk
Loading...
or support indie stores by buying on
(This book is on backorder)