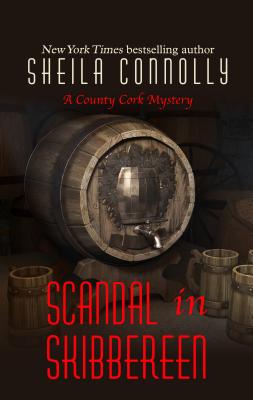 As the new owner of Sullivan's Pub in County Cork, Ireland, Maura Donovan gets an earful of all the village gossip. But uncovering the truth about some local rumors may close her down for good...
Bostonian Maura is beginning to feel settled in her new Irish home, just in time for summer tourist season to bring fresh business to her pub. But the first traveler to arrive is thirsty for more than just a pint of Guinness. Althea Melville is hot on the trail of a long-lost Van Dyck painting.
Maura agrees to help Althea meet with the residents at the local manor house, the most likely location of the missing art. But when the manor's gardener is found murdered, Maura wonders what Althea's real motives are. Now, to solve the secret of the lost portrait and catch a killer, Maura will have to practice her Irish gift of gab and hunt down some local history--before someone else is out of the picture...

Sheila has taught art history, structured and marketed municipal bonds for major cities, worked as a staff member on two statewide political campaigns, and served as a fundraiser for several nonprofit organizations. She also managed her own consulting company, providing genealogical research services. In addition to genealogy, Sheila loves restoring old houses, visiting cemeteries, and traveling. Now a full-time writer, she thinks writing mysteries is a lot more fun than any of her previous occupations.

She is married and has one daughter and two cats.
Loading...
or
Not Currently Available for Direct Purchase