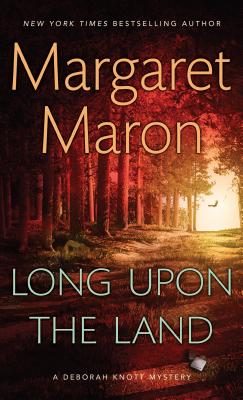 "Margaret Maron, "New York Times" bestselling author and Mystery Writers of America Grand Master, returns to Colleton County with an exciting new Deborah Knott mystery . . . "
LONG UPON THE LAND
On a quiet August morning, Judge Deborah Knott's father Kezzie makes a shocking discovery on a remote corner of his farm: the body of a man bludgeoned to death. Investigating this crime, Deborah's husband, Sheriff's Deputy Dwight Bryant, soon uncovers a long-simmering hostility between Kezzie and the slain man over a land dispute. The local newspaper implies that Deborah's family may have had something to do with the murder-and that Dwight is dragging his feet on the case.
Meanwhile, Deborah is given a cigarette lighter that once belonged to her mother. The cryptic inscription inside rekindles Deborah's curiosity about her parents' past, and how they met. For years she has wondered how the daughter of a wealthy attorney could have married a widowed, semi-illiterate bootlegger, and this time she's determined to find the answer.
But why are Deborah's brothers so reluctant to talk about the dead man? Is the murder linked to Kezzie's illegal whiskey business? And could his courtship of Deborah's mother have something to do with the bad blood between the two families? Despite Deborah's promise not to interfere in Dwight's work, she cannot stop herself from doing everything she can to help clear her brothers and her father from suspicion . . .

Margaret Maron grew up on a farm near Raleigh and lived in Brooklyn for many years. Returning to her North Carolina roots prompted Margaret to write a series based on her own background, the first of which, Bootlegger's Daughter, was a Washington Post bestseller and swept the major mystery awards for 1993.
Loading...
or
Not Currently Available for Direct Purchase