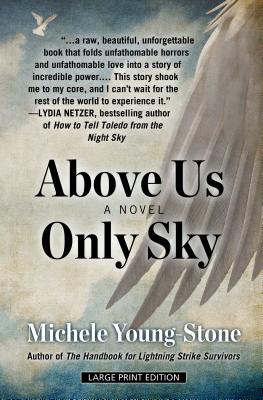 Above Us Only Sky

From the author of "The Handbook for Lightning Strike Survivors," which "Library Journal" called, "ripe for Oprah or fans of Elizabeth Berg or Anne Tyler," comes a magical novel about a family of women separated by oceans, generations, and war, but connected by something much greater--the gift of wings.
On March 29, 1973, Prudence Eleanor Vilkas was born with a pair of wings molded to her back. Considered a birth defect, her wings were surgically removed, leaving only the ghost of them behind.
At fifteen years old, confused and unmoored, Prudence meets her long-estranged Lithuanian grandfather and discovers a miraculous lineage beating and pulsing with past Lithuanian bird-women, storytellers with wings dragging the dirt, survivors perched on radio towers, lovers lit up like fireworks, and heroes disguised as everyday men and women. Prudence sets forth on a quest to discover her ancestors, to grapple with wings that only one other person can see, and ultimately, to find out where she belongs.
"Above Us Only Sky" spans the 1863 January Uprising against Russian Tsarist rule in Eastern Europe to the fall of the Berlin Wall, and Lithuania gaining its independence in 1991. It is a story of mutual understanding between the old and young; it is a love story; a story of survival, and most importantly a story about where we belong in the world. This "is a raw, beautiful, unforgettable book" (Lydia Netzer, bestselling author of "Shine, Shine, Shine").