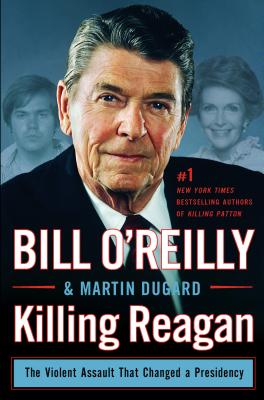 The Violent Assault That Changed a Presidency

From the team of Bill O'Reilly and Martin Dugard, bestselling authors of the blockbuster "Killing" series, now comes "Killing Reagan." This page-turning epic account of the career of President Ronald Reagan tells the vivid story of his rise to power -- and the forces of evil that conspired to bring him down.

Told in the same riveting fashion as "Killing Lincoln," "Killing Kennedy," "Killing Jesus," and "Killing Patton," "Killing Reagan" reaches back to the golden days of Hollywood, where Reagan found both fame and heartbreak, up through the years in California governor's mansion, and finally to the White House, where he presided over boom years and the fall of the Iron Curtain. But it was John Hinckley Jr.'s attack on him that precipitated President Reagan's most heroic actions. In "Killing Reagan," O'Reilly and Dugard take readers behind the scenes, creating an unforgettable portrait of a great man operating in violent times.

Bill O'Reilly is the anchor of "The O'Reilly Factor," the highest-rated cable news show in the country. He is the author of many number-one bestselling books, including "Killing Lincoln, Killing Kennedy, Killing Jesus, "and "Killing Patton."Martin Dugard is the "New York Times "bestselling author of several books of history. He and his wife live in Southern California with their three sons.
or
Buy Here
Copyright © 2020 American Booksellers Association