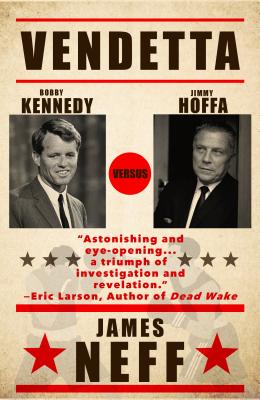 One of America's greatest investigative reporters brings to life the gripping, no-holds-barred clash of two American titans: Robert Kennedy and his nemesis Jimmy Hoffa.
From 1957 to 1964, Robert Kennedy and Jimmy Hoffa channeled nearly all of their considerable powers into destroying each other. Kennedy's battle with Hoffa burst into the public consciousness with the 1957 Senate Rackets Committee hearings and intensified when his brother named him attorney general in 1961. RFK put together a "Get Hoffa" squad within the Justice Department, devoted to destroying one man. But Hoffa, with nearly unlimited Teamster funds, was not about to roll over.
Drawing upon a treasure trove of previously secret and undisclosed documents, James Neff has crafted a brilliant, heart-pounding epic of crime and punishment, a saga of venom and relentlessness and two men willing to do anything to demolish each other.

James Neff has overseen multiple Pulitzer Prize winning series as investigations editor at the "Seattle Times." The author of "The Wrong Man, Unfinished Murder, "and "Mobbed Up," he lives in the Seattle area.
Loading...
or
Not Currently Available for Direct Purchase