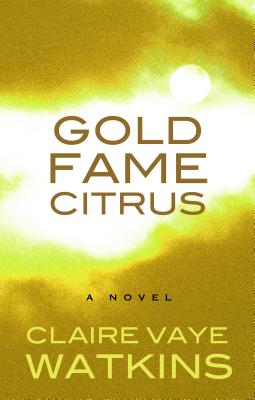 “Watkins' depiction of a sun-scorched, drought-plagued West is a hypnotic and terrifying vision of an otherworldly and, perhaps most frightening of all, not-too-distant future. Part J.G. Ballard, part Joan Didion, Gold Fame Citrus explores the complexities of human relationships in the face of environmental catastrophe. Loneliness, jealousy, heartbreak, love, loyalty -- even in a post-apocalyptic wasteland, people are still people, though just what sort of people is another thing altogether. Haunting and hallucinatory, the world crafted by Watkins is a dream of the future that will not soon be forgotten.”
— Emily Ballaine (W), Green Apple Books on the Park, San Francisco, CA
View the List

The much-anticipated first novel from a Story Prize-winning 5 Under 35 fiction writer.
In 2012, Claire Vaye Watkins's story collection, "Battleborn," swept nearly every award for short fiction. Now this young writer, widely heralded as a once-in-a-generation talent, returns with a first novel that harnesses the sweeping vision and deep heart that made her debut so arresting to a love story set in a devastatingly imagined near future:
Unrelenting drought has transfigured Southern California into a surreal, phantasmagoric landscape. With the Central Valley barren, underground aquifer drained, and Sierra snowpack entirely depleted, most Mojavs, prevented by both armed vigilantes and an indifferent bureaucracy from freely crossing borders to lusher regions, have allowed themselves to be evacuated to internment camps. In Los Angeles Laurel Canyon, two young Mojavs Luz, once a poster child for the Bureau of Conservation and its enemies, and Ray, a veteran of the forever war turned surfer squat in a starlet's abandoned mansion. Holdouts, they subsist on rationed cola and whatever they can loot, scavenge, and improvise.
The couple's fragile love somehow blooms in this arid place, and for the moment, it seems enough. But when they cross paths with a mysterious child, the thirst for a better future begins. They head east, a route strewn with danger: sinkholes and patrolling authorities, bandits and the brutal, omnipresent sun. Ghosting after them are rumors of a visionary dowser a diviner for water and his followers, who whispers say have formed a colony at the edge of a mysterious sea of dunes.
Immensely moving, profoundly disquieting, and mind-blowingly original, Watkins's novel explores the myths we believe about others and tell about ourselves, the double-edged power of our most cherished relationships, and the shape of hope in a precarious future that may be our own.

Claire Vaye Watkins is the author of "Battleborn" and a National Book Foundation 5 Under 35 fiction writer, as well as the recipient of the Story Prize, the American Academy of Arts and Letters s Rosenthal Family Foundation Award, and a Guggenheim Fellowship, among many other honors. Her stories and essays have appeared in "Granta," "One Story," "The Paris Review," "Ploughshares," "Glimmer Train," "Best of the West 2011," "Best of the Southwest 2013," and elsewhere. An assistant professor at the University of Michigan, Watkins has also taught at Bucknell and Princeton, and she and her husband, the writer Derek Palacio, are codirectors of the Mojave School, a creative writing workshop for teenagers in rural Nevada."
or
Not Currently Available for Direct Purchase
Copyright © 2020 American Booksellers Association