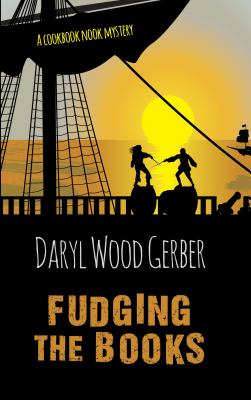 The Agatha Award winning author of "Stirring the Plot" returns to the Cookbook Nook in Crystal Cove, California, where February brings Pirate Week, National Chocolate Month and bitter murder
Pirate Week is sweeping through Crystal Cove and keeping Jenna Hart and her bookstore, the Cookbook Nook, plenty busy. But she's not too swamped to also host the local Chocolate Cookbook Club's meeting especially because the guest of honor is her friend, candy maker and cookbook author Coco Chastain.
Jenna whips up a delicious event amidst the rowdy festivities, but the mood is soon broken by robberies, simmering tempers, and a dead body Coco's editor, Alison. The suspects turn out to be more plentiful than a pot full of gold doubloons, so to prove Coco isn t responsible for the dastardly deed, Jenna will have to stir up some clues and figure out who's the real sticky-fingered killer
INCLUDES RECIPES

Daryl Wood Gerber is the Agatha Award winning author of "Stirring the Plot," " Inherit the Word," and "Final Sentence," as well as the Cheese Shop Mysteries under the pseudonym Avery Aames. Like her protagonist, Daryl is an admitted foodie and an avid reader of books, including cookbooks. Prior to writing, Daryl acted on stage and television, including on "Murder, She Wrote.""
Loading...
or
Not Currently Available for Direct Purchase