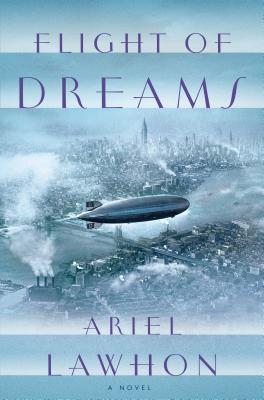 With everyone onboard harboring dark secrets and at least one person determined to make sure the airship doesn't make the return trip, "Flight of Dreams" gives an utterly suspenseful, heart-wrenching explanation for one of the most enduring mysteries of the twentieth century.
On the evening of May 3, 1937, Emilie Imhof boards the "Hindenburg." As the only female crewmember, Emilie has access to the entire airship, from the lavish dining rooms and passenger suites to the gritty engine cars and control room. She hears everything, but with rumors circulating about bomb threats, Emilie's focus is on maintaining a professional air . . . and keeping her own plans under wraps.
What Emilie can't see is that everyone from the dynamic vaudeville acrobat to the high-standing German officer seems to be hiding something.
Giving free rein to countless theories of sabotage, charade, and mishap, "Flight of Dreams "takes us on the thrilling three-day transatlantic flight through the alternating perspectives of Emilie; Max, the ship's navigator who is sweet on her; Gertrud, a bold female journalist who's been blacklisted in her native Germany; Werner, a thirteen-year-old cabin boy with a bad habit of sneaking up on people; and a brash American who's never without a drink in his hand. Everyone knows more than they initially let on, and as the novel moves inexorably toward its tragic climax, the question of which of the passengers will survive the trip infuses every scene with a deliciously unbearable tension.
With enthralling atmospheric details that immediately transport and spellbinding plotting that would make Agatha Christie proud, "Flight of Dreams" will keep you guessing till the last page. And, as "The New York Times Book Review" said of her last novel, "This book is more meticulously choreographed than a chorus line. It all pays off.

ARIEL LAWHON is cofounder of the popular website SheReads.org. A novelist, blogger, and lifelong reader, she lives in the rolling hills outside Nashville, Tennessee, with her husband, four sons, and black lab who is, thankfully, a girl."
Loading...
or
Not Currently Available for Direct Purchase