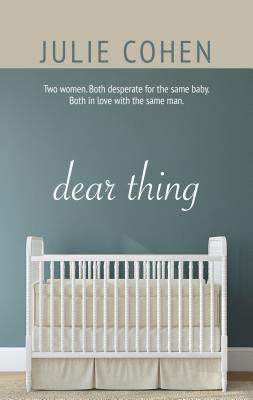 After years of watching her best friends Ben and Claire try for a baby, Romily has offered to give them the one thing that they want most.

Romily expects it will be easy to be a surrogate. She's already a single mother, and she has no desire for any more children. But Romily isn't prepared for the overwhelming feelings that have taken hold of her and which threaten to ruin her friendship with Ben and Claire-and even destroy their marriage.

Now there are three friends, two mothers and only one baby, and an impossible decision to make...

Thought-provoking, heart-rending but ultimately uplifting, Julie Cohen's "Dear Thing" is a book you won't be able to put down, until you pass it on to your best friends.

JULIE COHEN grew up in Maine and studied English at Brown University and Cambridge University. She then moved to the UK permanently, where she taught English before becoming a writer. Her books have won or been shortlisted for the Romantic Novelists' Association's Award, the National Readers' Choice Award, and the HOLT Medallion. She now writes full-time and teaches creative writing. She lives with her husband and son in Berkshire, England, where she is teased daily about her American accent. "Dear Thing" is her first novel to be published in North America.
Loading...
or
Not Currently Available for Direct Purchase