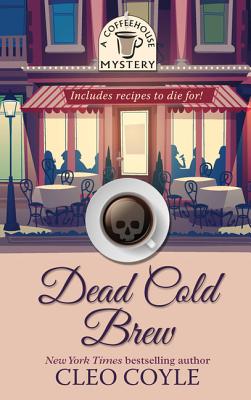 The "New York Times" bestselling Coffeehouse Mysteries return, as the perfect proposal leads to a chilling cold case...
"Coffeehouse manager Clare Cosi sheds tears of joy when her NYPD detective boyfriend surprises her with an engagement ring. But her bridal bliss is put on hold when a chilling mystery brings a wave of deadly danger to those she holds dear..."
After everything Clare and Mike have been through, they deserve a little bit of happily ever after. So when Mike decides to put a ring on Clare's finger, Clare's eccentric octogenarian employer is there to help. She donates the perfect coffee-colored diamonds to include in the setting and the name of a world-famous jeweler who happens to be an old family friend. But while the engagement is steeped in perfection, the celebration is not long lived.
First, a grim-faced attorney interrupts their party with a mysterious letter bequeathing a strange, hidden treasure to Clare's daughter. Next, the renowned jeweler who designed Clare's ring is found poisoned in his shop. Both events appear to be connected to a cold case murder involving a sunken ship, an Italian curse, a suspiciously charming jewel thief, and a shocking family secret. With deadly trouble brewing, Clare must track down clues in some of New York's most secret places before an old vendetta starts producing fresh corpses.
With recipes to die for, including how to make cold-brew coffee at home

Cleo Coyle is a pseudonym for Alice Alfonsi, writing in collaboration with her husband, Marc Cerasini. Both are "New York Times" bestselling authors of the Coffeehouse Mysteries ("Dead to the Last Drop, Once Upon a Grind," "Billionaire Blend") now celebrating more than ten years in print. As Alice Kimberly, they also write the nationally bestselling Haunted Bookshop Mysteries. Alice has worked as a journalist in Washington, D.C., and New York, and has written popular fiction for adults and children. A former magazine editor, Marc has authored espionage thrillers and nonfiction for adults and children. Alice and Marc are also bestselling media tie-in writers who have penned properties for Lucasfilm, NBC, Fox, Disney, Imagine, and MGM. They live and work in New York City, where they write independently and together."
Loading...
or
Not Currently Available for Direct Purchase