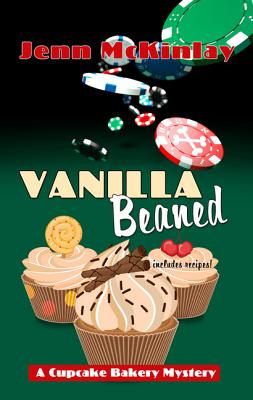 In the eighth in the "New York Times" bestselling series by the author of "Dark Chocolate Demise," the Fairy Tale Cupcake crew goes double or nothing in Vegas...
Melanie Cooper and Angie DeLaura are taking a gamble by opening their first franchise of the Fairy Tale Cupcakes Bakery, so where better to hit the jackpot than in Vegas? Business manager Tate Harper has lined up a meeting with Holly Hartzmark, a former showgirl who's looking to bring Mel and Angie's sweet treats to Sin City, but Mel isn t so sure she's ready to hand her recipes over to a complete stranger especially one as brash as Holly.
But after the potential bakery location gets blown up, Mel begins seeing another side to Holly one that reminds her very much of herself. Determined to help a kindred spirit, Mel sets out to discover who is trying to keep the bakery from cashing in. But with a murderous mischief maker on the loose, the odds are stacking up against a happy ending for Mel and her friends...

Jenn McKinlay, "New York Times "bestselling author of the Cupcake Bakery mysteries, including "Dark Chocolate Demise," "Sugar and Iced," and "Going, Going, Ganache," has baked and frosted cupcakes into the shapes of cats, mice, and outer space aliens, to name just a few. Writing a mystery series based on one of her favorite food groups (dessert) is as enjoyable as licking the beaters, and she can t wait to whip up the next one. She is also the author of the Hat Shop Mysteries ("Copy Cap Murder," "At the Drop of a Hat") and the Library Lover s Mysteries ("A Likely Story," "On Borrowed Time"). She lives in Scottsdale, Arizona, with her family."
or
Not Currently Available for Direct Purchase
Copyright © 2020 American Booksellers Association