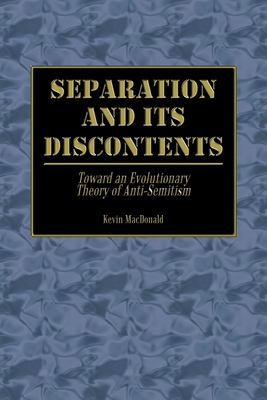 Separation and Its Discontents

Toward an Evolutionary Theory of Anti-Semitism

This book builds upon my previous work, A People That Shall Dwell Alone: Judaism as a Group Evolutionary Strategy (MacDonald 1994/2002; hereafter PTSDA). While PTSDA focused on developing a theory of Judaism within an evolutionary framework, the present volume focuses on the phenomenon of anti-Semitism. Judaism and anti-Semitism fairly cry out for an evolutionary interpretation. Anti-Semitism has been a very robust tendency over a very long period of human history and in a wide range of societies with different forms of government, different economic systems, and different dominant religious ideologies. Many anti-Semitic episodes, such as the Iberian inquisitions and the Nazi holocaust, have been characterized by extraordinary intra-societal violence. Moreover, anti-Semitism has sometimes been characterized by a very overt, self-conscious racialism...a phenomenon that immediately suggests the relevance of evolutionary theory. The basic thesis of this book can be summarized by the proposition that Judaism must be conceptualized as a group strategy characterized by cultural and genetic segregation from gentile societies combined with resource competition and conflicts of interest with segments of gentile societies. This cultural and genetic separatism combined with resource competition and other conflicts of interest tend to result in division and hatred within the society. Nevertheless, as Leslie White (1966, 3) wrote many years ago in his discussion of the Boasian school of anthropology as a politically inspired cult, "One who follows procedures such as these incurs the risk of being accused of indulging in non-scholarly, personal attacks upon whom he discusses. Such a charge is, in fact, expectable and completely in keeping with the thesis of this essay. We wish to state that no personal attacks are intended." No personal or ethnic attacks are intended here, either. Nevertheless, the charge that this is an anti-Semitic book is, to use White's phrase, expectable and completely in keeping with the thesis of this essay. A major theme of this volume, found especially in Chapters 6 and 7, is that intellectual defenses of Judaism and of Jewish theories of anti-Semitism have throughout its history played a critical role in maintaining Judaism as a group evolutionary strategy. Parts of the book read as a sort of extended discourse on the role of Jewish self-interest, deception, and self-deception in the areas of Jewish historiography, Jewish personal identity, and Jewish conceptualizations of their ingroup and its relations with outgroups. This is therefore first and foremost a book that confidently predicts its own irrelevance to those about whom it is written. MacDonald, K. B. (1994/2002). A People that Shall Dwell Alone: Judaism as a Group Evolutionary Strategy. Westport, CT: Praeger. Paperback edition published in 2002 by iUniverse (Lincoln, NE) (www.iuniverse.com). White, L. (1966). The social organization of ethnological theory. Rice University Studies: Monographs in Cultural Anthropology.

Kevin MacDonald is Professor of Psychology at California State University-Long Beach, Long Beach, CA 90840-0901, USA. His research has focused on developing evolutionary perspectives in history and developmental psychology. After receiving a Masters degree in evolutionary biology, he received a Ph.D. in biobehavioral sciences at the University of Connecticut working on behavioral development in wolves, and he continued developmental research during a post-doctoral fellowship at the University of Illinois performing research on human parent-child play. His research has focused on developing evolutionary perspectives in developmental psychology. He has also authored four books, Social and Personality Development: An Evolutionary Synthesis (NY: Plenum, 1988) and A People that Shall Dwell Alone: Judaism as a Group Evolutionary Strategy (Westport, CT: Praeger, 1994), Separation and Its Discontents: Toward an Evolutionary Theory of Anti-Semitism (Westport, CT, 1998), and The Culture of Critique: An Evolutionary Analysis of Jewish Involvement in Twentieth-Century Intellectual and Political Movements (Westport, CT, 1998).
Loading...
or support indie stores by buying on