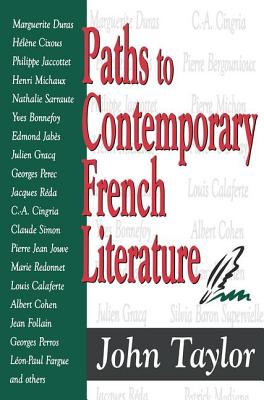 Although the great French novelists of the last two centuries are widely read in America, there is a widespread notion that little of importance has happened in French literature since the heyday of Sartre, Camus, and the nouveau roman. Some might argue that even well read Americans are ignorant about what is happening in European literature generally. Certainly, there has never been so few translations of foreign books in the United States, or so little coverage of foreign writers. Curious American readers need new, up-to-date information and analyses about what is happening elsewhere. Paths to Contemporary French Literature is a stimulating and much-needed guide to the major currents of one of the world's great literatures.

This critical panorama of contemporary French literature introduces English-language readers to over fifty important writers and poets, many of whom are still little known outside of France. Emphasizing authors who are admired by their peers (as opposed to those with overnight reputations), John Taylor offers a compelling insider's view. The pioneering essays included in this book offer incisive analyses of the ideas motivating current writing and delve into a writer's or poet's entire output. Although some names may be familiar (Marguerite Duras, Hulbne Cixous, Philippe Jaccottet, Henri Michaux), the reader obtains fresh reappraisals of their seminal work. Especially noteworthy, however, are Taylor's lively introductions to many other key writers who either have not yet crossed the English Channel, let alone the Atlantic. Combating the notion that French literature is overtly intellectual, inaccessible, or interested only in formal experimentation, Taylor shows that many French writers are instead acutely inquisitive about the outside world, shrewd observers of reality, even very funny.

Although not conceived as a reference book, the volume possesses some qualities of a reference work: a good bibliography, reliable dates and biographical facts. Paths to Contemporary French Literature will be of interest to students of French literature and culture, literary scholars, and readers of contemporary fiction and poetry.