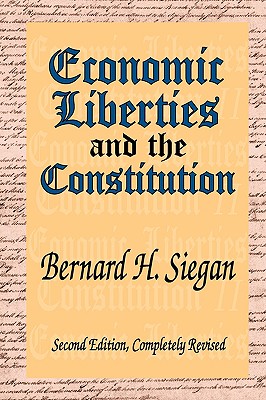 Economic Liberties and the Constitution

In this seminal work, Bernard Siegan traces the history of onstitutional protection for economic liberties in the United States. He argues that the law began to change with respect to economic liberties in the late 1930s. At that time, the Supreme Court abdicated much of its authority to protect property rights, and instead condoned the expansion of state power over private property.

Siegan brings the argument originally advanced in the .first edition completely up to date. He explores the moral position behind capitalism and discusses why former communist countries flirting with decentralization and a free market (for instance, China, Cambodia, Vietnam, and Laos) have become more progressive and prosperous as a result. He contrasts the benefits of a free, deregulated economy with the dangers of over-regulation and moves towards socialized welfare-most specifically as happened during Franklin Roosevelt's presidency. Supporting his thesis with historical court cases, Siegan discusses the past and present status of economic liberties under the Constitution, clarifies constitutional interpretation and due process, and suggests ways of safeguarding economic liberties.

About the original edition, Doug Bandow of Reason noted, "Siegan has written a vitally important book that is sure to ignite an impassioned legal and philosophical debate. The reason-the necessity-for protecting economic liberty is no less than that guaranteeing political and civil liberty." Joseph Sobran of the National Review wrote, "Siegan...makes a powerful general case for economic liberty, on both historical and more strictly empirical grounds.... Siegan has done a brilliant piece of work, not only where it was badly needed, but where the need had hardly been recognized until he addressed it." And Edwin Meese remarked that, "This timely and important book shows how far we have drifted from protecting basic liberties that the Framers of the Constitution sought to secure. I recommend it highly." This new, completely revised edition of Economic Liberties and the Constitution will be essential reading for students of economics, history, public policy, law, and political science.