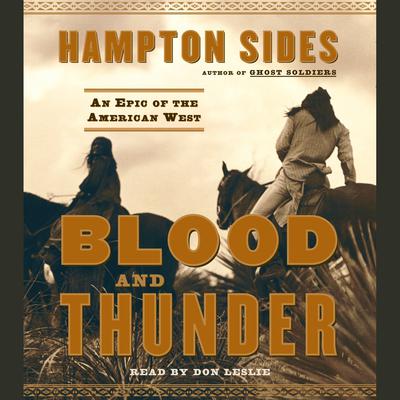 Praise for Blood and Thunder


“Kit Carson’s role in the conquest of the Navajo during and after the Civil War remains one of the most dramatic and significant episodes in the history of the American West. Hampton Sides portrays Carson in the larger context of the conquest of the entire West, including his frequent and often lethal encounters with hostile Native Americans. Unusually, Sides gives full voice to Indian leaders themselves about their trials and tribulations in their dealings with the whites. Here is a national hero on the level of Daniel Boone, presented with all of his flaws and virtues, in the context of American people’s belief that it was their Manifest Destiny to occupy the entire West.”

—Howard Lamar, Sterling Professor Emeritus of History, Yale University and editor of The New Encyclopedia of the American West


“The story of the American West has seldom been told with such intimacy and immediacy. Legendary figures like Kit Carson leap to life and history moves at a pulse-pounding pace—sweeping the reader along with it. Hampton Sides is a terrific storyteller.”

—Candice Millard, author of The River of Doubt


“Hampton Sides doesn't just write a book, he transports the reader to another time and place. With his keen sense of drama and his crackling writing style, this master storyteller has bequeathed us a majestic history of the Old West.”

—James Bradley, author of Flags of Our Fathers and Flyboys


“Blood and Thunder is a big-hearted book whose subject is as expansive as they come. Hampton Sides tackles it with naked pleasure and narrative cunning: In his telling, the vast saga of America’s westward push has a logical center. The dusty town of Santa Fe becomes the nexus around which swirl the fortunes and strategies of a mixed set of serious overachievers, from Kit Carson, the original mountain man, to James K. Polk, the enigmatic president whose achievements, in the dreaded name of Manifest Destiny, were almost biblical in scope. Sides is alive to the exuberance and alert to the tragedy of the taking of the West.”

—Russell Shorto, author of Island at the Center of the World


“For a huge percentage of us immigrant Americans (those whose ancestors arrived after 1492), Hampton Sides fills a gaping hole in our knowledge of American history—a vivid account of how ‘The New Men’ swept away the thriving civilizations of the Native Americans in their conquest of the West.”

A native of Memphis, HAMPTON SIDES is editor-at-large for Outside magazine and the author of the international bestseller Ghost Soldiers, which was the basis for the 2005 Miramax film The Great Raid. Ghost Soldiers won the 2002 PEN USA Award for nonfiction and the 2002 Discover Award from Barnes & Noble, and his magazine work has been twice nominated for National Magazine Awards for feature writing. Hampton is also the author of Americana and Stomping Grounds. A graduate of Yale with a B.A. in history, he lives in New Mexico with his wife, Anne, and their three sons.